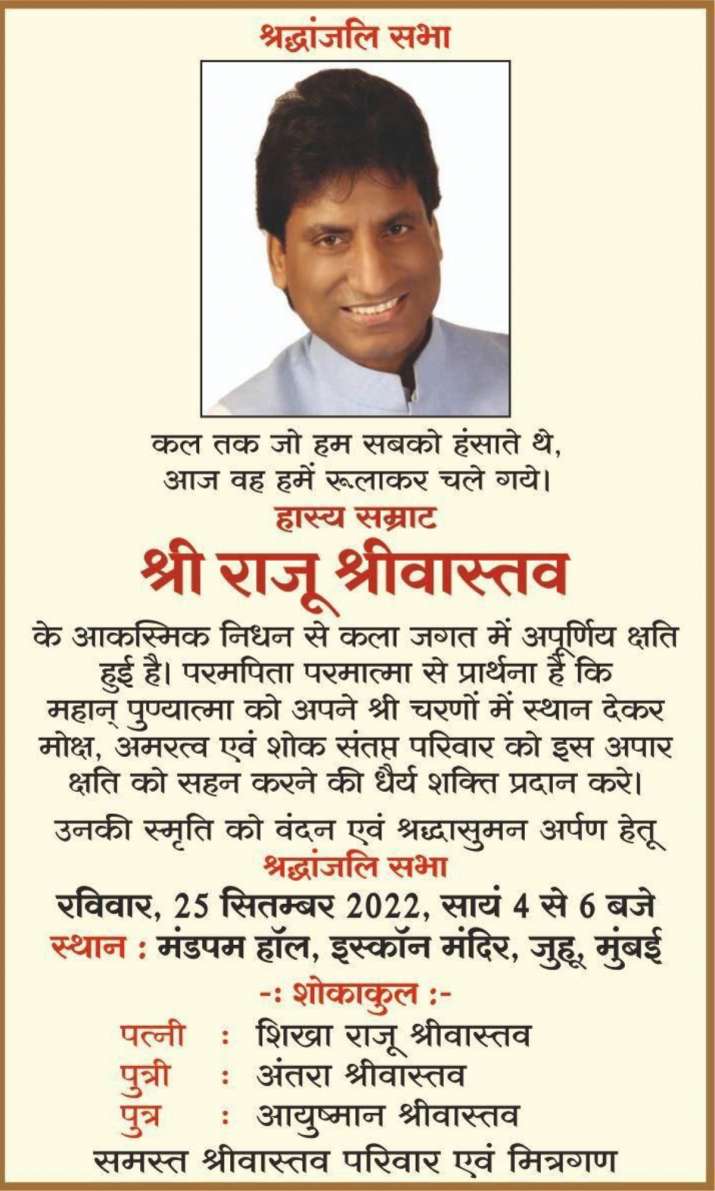 Mumbai: Comedian-actor Raju Srivastava said goodbye to the world on 21 September. The 58-year-old artist breathed his last at Delhi’s AIIMS Hospital. He was admitted to the hospital on August 10 after suffering a heart attack while working out in the gym and was undergoing treatment under the supervision of doctors.

His last rites were performed at Nigambodh Ghat, Kashmere Gate. Now, the prayer meeting of Raju Srivastava Prayer Meet will be held on Sunday (25 September) at ISKCON Temple, Juhu in Mumbai. Reportedly, his wife Shikha is expected to visit Mumbai on Saturday. According to his family members, the prayer meeting is scheduled from 4:00 PM to 6:00 PM.

The popular comedian passed away on September 21, after his battle in the ICU for more than 40 days at AIIMS. On August 10, after suffering a heart attack and his condition worsened, he was taken to the hospital, where he underwent angioplasty. Since then he was on ventilator and never regained consciousness. According to hospital sources, he was declared brought dead on September 21 at 10:20 am. His body was taken to Nigambodh Ghat crematorium for the last rites.

On 22 September, an ambulance decorated with white flowers left for the Nigambodh Ghat crematorium at Kashmere Gate at 9 am for the last rites, in which senior poet-comedians Surendra Sharma and Ashok Chakradhar were also present. Srivastava’s son Ayushman performed the last rites of the father according to Hindu rituals.

Born in Kanpur in 1963 to Maa Saraswati, a government employee and a comic poet, and homemaker. His comic career spanned nearly four decades. He played outstanding roles in several films, including hit Hindi films like “Maine Pyaar Kiya” and “Baazigar”. He gained nationwide fame as a participant in the 2005 reality comedy competition show “The Great Indian Laughter Challenge”.