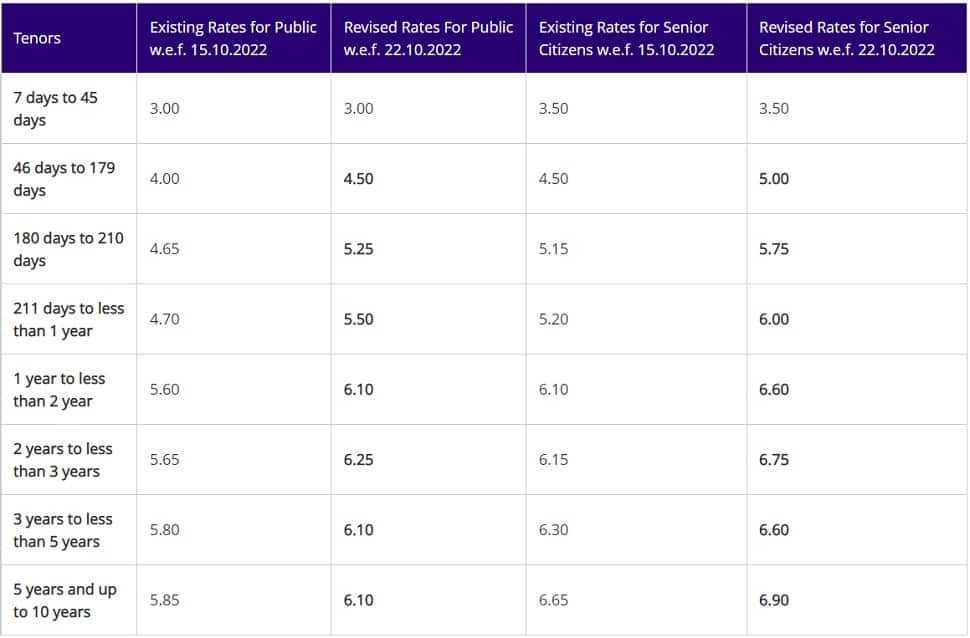 New Delhi: State Bank of India has increased its interest rate twice within a week to make its fixed deposits more attractive and competitive. Let us inform that many banks including IDBI, Yes Bank, Axis Bank and Union Bank have already increased their FD rates and then the largest public sector lender SBI has also had to increase the rates.

While SBI increased its fixed deposit rates for the first time from October 15, it again increased the rates on October 21. The new rates have come into effect from 22 October i.e. today.

Now fixed deposits of less than Rs 2 crore for a period of more than 211 days but less than 1 year will attract an interest of 5.50 per cent from October 22 as against 4.70 per cent earlier. For other maturities, the quantum of rate hike ranged from 0.25 per cent to 0.6 per cent. However, the bank has kept the deposit rates for 7-45 days unchanged at 3 per cent.

Fixed deposits with maturities of two to three years will fetch an interest of 6.25 per cent and between three and ten years, 6.1 per cent. However, senior citizens will get an additional interest of 0.5 per cent. SBI has also introduced a specific tenor of 1000 days on which it is offering an interest rate of 6.1% from 15-August-2022. Offer is valid till 31st October.

SBI offers an additional interest of one percent for its employees and pensioners. Thus, an SBI pensioner or retired officer will get double benefit as they will get the benefit of both Staff (1%) and Resident Indian Senior Citizen (0.50%). Thus, they can earn an interest of 7.9 per cent on fixed deposits maturing between five to 10 years as the bank is offering a rate of 6.9 per cent for senior citizens.